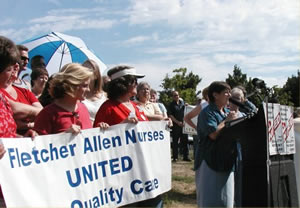 For the nurses of Vermont’s largest hospital, Fletcher Allen, three times was not the charm. The more than 1,200 registered nurses of the hospital had tried unsuccessfully to form a union three times over the previous decade in the face of management’s aggressive union-busting tactics.

On their fourth try, with the help of the Vermont Workers’ Center / Jobs with Justice and the AFL-CIO, the nurses had an unprecedented level of community support. This helped to tip the scales in their favor. In the latest and most dramatic victory in the Workers’ Center’s Justice for Healthcare Workers Campaign, the Fletcher Allen nurses, organized as new members of United Professions of Vermont/American Federation of Teachers Local 5221, won their contract campaign.

The proposed new agreement includes a ban on floating, a ban on mandatory overtime (which will ensure that nurses are not forced to work grueling back-to-back shifts) and staffing ratios, based on the California ratios with an additional mechanism which gives nurses the ability to change ratios and control over the Hospital’s staffing budget — which makes it among the best agreements in the country in terms of staffing language.

The groundswell of public support for the nurses’ historic victory represents the culmination of years of Workers’ Center community mobilization around a series of union struggles. In 1998, the United Nurses & Allied Professionals Local 5109 went on strike at Copley Hospital. It was big news in a small Vermont community.

The Workers’ Center helped by doing a tremendous amount of leafleting, phonebanking, writing letters to the editor, coordinating rides for community members to our picket line, calling the hospital CEO, and attending a huge rally. They used similar mobilization tactics later that same year, when nurses at Rutland Regional Medical Center organized a union, Office and Professional Employees International Union Local 6, and had to withstand an anti-union decertification drive after not getting their first contract. With the community’s help, the union defeated the decertification drive and got their first contract.

When workers at Berlin Health and Rehabilitation Center (BH&RC) in central Vermont organized with the United Electrical, Radio and Machine Workers of America (UE) in 2000 to become the first unionized private nursing home in the state, the Workers’ Center put its muscle behind their struggle. Adding to the challenge was the hiring, by the corporation that ran BH&RC, of the notorious union-busting law firm Jackson Lewis. The UE and the Workers’ Center fought the Jackson Lewis anti-union campaign by organizing an Appeal to Fairness petition that called on the company to end the campaign and respect the workers’ right to organize. Religious leaders, politicians, and hundreds of community members heeded the call to sign the petition.

The Appeal to Fairness was delivered to the BH&RC administration by a community delegation. Just as important, it was also given to all the nursing home workers, so they knew their community was behind them. The workers prevailed and formed a union, UE Local 254, and entered into 19 arduous months of bargaining to win a first contract.

To support the workers through this struggle, the Workers’ Center formed a community support committee that organized candlelight vigils, rallies, targeted parades, and informational pickets at BH&RC and its sister facilities throughout the state.

Community delegations were sent to the U.S. headquarters of the corporation that owns BH&RC and a stockholders meeting in Toronto, and also made several visits to the nursing home itself. With the tremendous commitment of a core group of leaders from the organizing committee at this nursing home (which sees approximately 70% annual worker turnover) supported by intense, organized community pressure, the workers were able to achieve their purpose and more.

Not only did the BH&RC workers get their contract in January 2002, but the state of Vermont, responding to all the attention generated by this campaign (which focused on the need for decent working conditions and adequate staffing in nursing homes) implemented the first ever staffing rules for Vermont nursing homes.

During this time of community organizing around the BH&RC workers, the Workers’ Center realized that short-staffing and poverty wages were prevalent in all other nursing homes in the state as well. And with five or more unions representing healthcare workers in Vermont, something needed to be done to bring them all together to work in common struggle. From these realizations, the “Justice for Healthcare Workers” campaign was born.

The campaign has been successful because it has enabled Vermont’s five health care unions, along with community activists from all over the state, to work together towards a common goal. It has also framed the various healthcare worker struggles throughout the state as one big struggle, in the broader context of healthcare reform and as a social justice cause.

The Workers’ Center also sees the Fletcher Allen campaign as a groundbreaking victory in healthcare that creates the potential for fixing a broken healthcare system in Vermont. It has held rallies, forums, workshops and public education events around the need for universal healthcare access. As healthcare workers organize and unite their struggles, they can help lead the fight for worker justice and quality, and affordable healthcare for all. With eight of twelve Vermont hospitals, all nursing homes but one and thousands of other healthcare workers unorganized, we look forward to building off these recent victories to win many more for both the labor and healthcare justice movements!