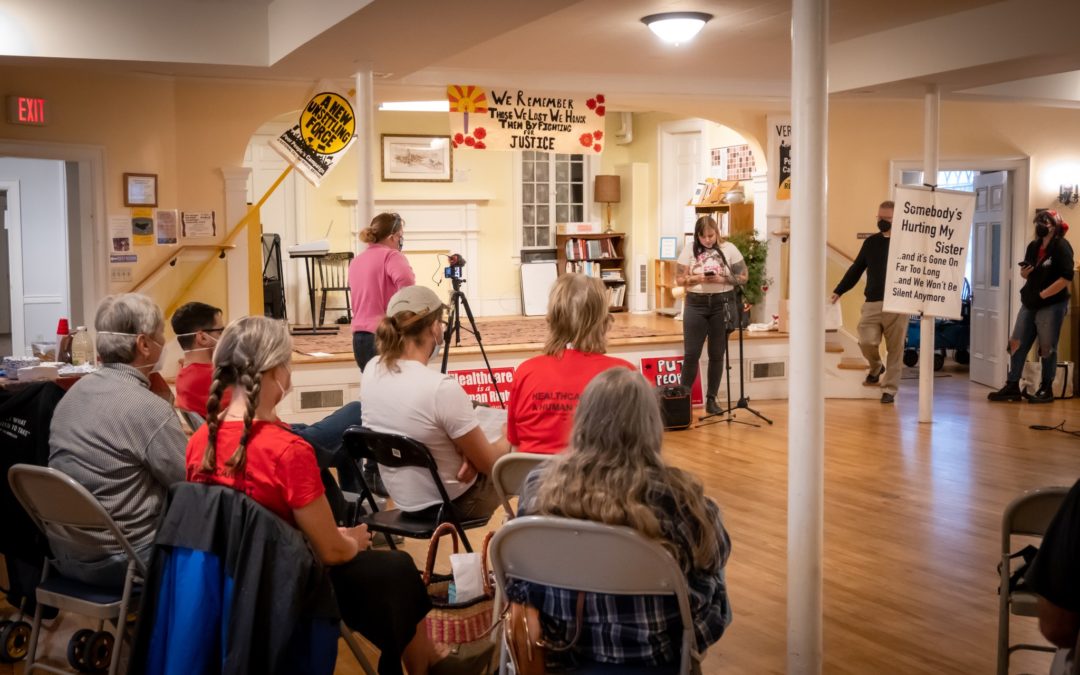 On Sept. 18th, dozens gathered at the Unitarian Church of Montpelier to mourn, testify, and pledge to take action to end poverty and the denial of healthcare.

We Cry Justice was co-organized by the VWC, Vermont Poor People’s Campaign: A National Call for Moral Revival and the national Nonviolent Medicaid Army.

“I’ve seen our people dying from a lack of mental healthcare services, and I’ve seen the families of our people crying for justice,” said Maggie Belensz, an ER nurse at UVM Medical Center. “People are not put in these situations because of immorality. We are struggling because we live in a country that doesn’t care about the poor.”

“We in America, if you listen to the way the media tells it, live under the specter of the shadow of war,” said Volney Gordon. “But every day in the communities I organize in and work in and live in, I’m seeing death tolls so obscene, so detatched from logic or compassion, they can only be associated with the body count of a war.”

“It’s hard to feel like there’s not an organized attack on the working class when, during the pandemic, the rift between those flourishing and those floundering has only become more obvious.”

“We have a lot of work to do.” Karen Saunders shared the words of Patrick Braswell, founder and president of the Rochester Homeless Union, who passed away in 2021. “But,” Patrick had said in the class they were taking together at the time, “we were built for this work.”

In the leadup to the Nonviolent Medicaid Army Week of Action, Breakthrough News embedded with our sibling organization Put People First! Pennsylvania and produced this short documentary about the fight against hospital closures and healthcare profiteering in rural America.