Karen Saunders: Move forward together, not one step back on human rights 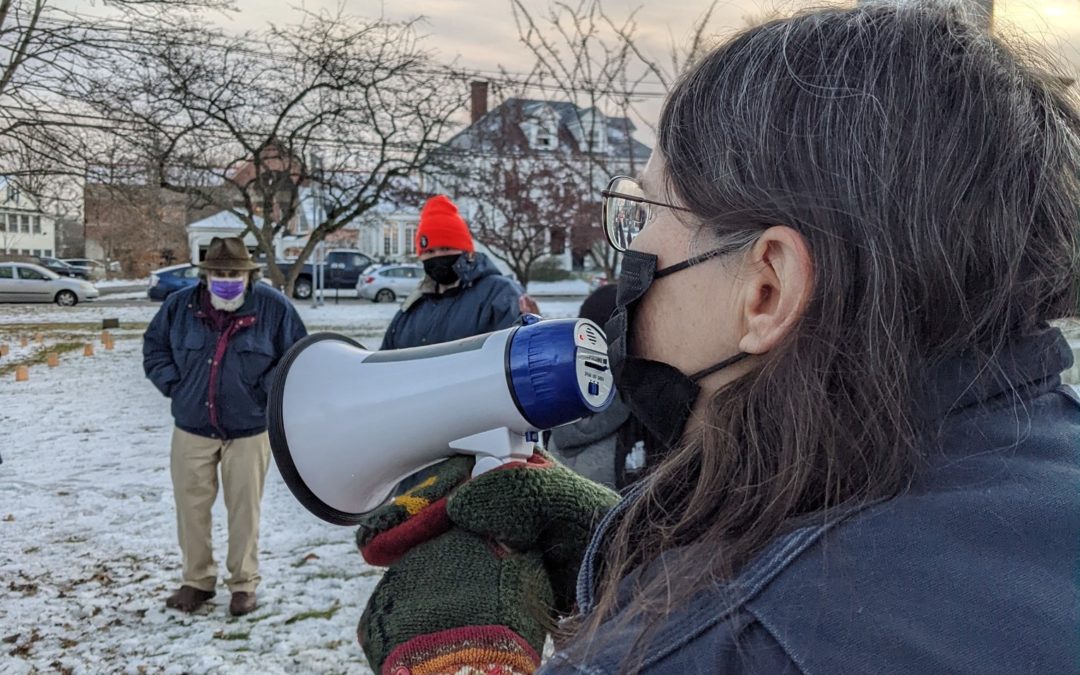 (This OpEd by Karen Saunders was published in the VTDigger, Brattleboro Reformer, and Caledonian Record).

In the final years of his life, Rev. Dr. Martin Luther King Jr. took up the Poor People’s Campaign — a crusade to unite the poor across color lines in a broad-based movement to end poverty, racism and militarism and secure human rights for all.

“There is nothing new about poverty,” he reflected in 1967. “What is new, however, is that we now have the resources to get rid of it. Why should there be hunger and privation in any land, in any city, at any table, when man (sic) has the resources and the scientific knowhow to provide all mankind with the basic necessities of life?”

Dr. King’s moral condemnation of the nation’s political and economic priorities holds true today. Over 800,000 people in the U.S. have died from Covid-19, while millions more have been pushed into poverty and mental health crises. Yet, rather than solving these social problems, the benefits of publicly funded research and advanced technology have instead flowed into military budgets and the pockets of billionaires.

The resources and scientific knowhow to invest in public health and human rights are all there — and if the pandemic showed us anything, it is that the government must take the lead in regulating bad actors and driving needed social and economic change.

Here in Vermont, tens of thousands have benefited from the state’s eviction moratorium and motel voucher program, expanded Medicaid eligibility and the mobilization of emergency response workers to distribute Covid tests and vaccines. Thousands more were kept afloat by the federal government’s expanded unemployment insurance and child tax credit.

As the Omicron variant tears through our communities, however, Vermont’s leaders are poised to roll back even these Band-Aid solutions. It appears they’ve also taken off the table the question of expanding public health care programs, falling back on a model of “trickle-down health care” that puts faith in unproven payment reform over direct investment in health care staff and services.

Unless lawmakers intervene, Vermont’s motel voucher program will end on March 1, leaving hundreds of people without access to housing.

On the health care front, adult Medicaid enrollment grew by 15,000 people between July 2020 and July 2021, due in part to the suspension of eligibility redetermination during the pandemic. Yet, instead of building on this expansion to bring more and more people into Medicaid, the state is already preparing to kick thousands out of the program once the federal public health emergency is lifted, leaving these people to the cruel vagaries of the insurance market.

If we want our system to provide more care and less bureaucracy, the money is there. UVM Health Network’s subsidiary OneCare Vermont saved $23 million in 2020 because many people avoided going to the doctor. However, under the terms of the contract with OneCare, the state and federal governments must reimburse them for that “care.” This public money should go toward raising wages for health care workers and expanding access to care, not paying UVM Health Network for care that no one received.

Is there anything more severe than a global pandemic that could wake us up to the necessity to invest directly in public health and housing for all?

Last year, the Legislature made promising moves by establishing a Task Force on Affordable, Accessible Health Care charged with making health care more affordable for Vermont residents and employers. Sadly, the task force, which many have seen as our state’s best hope for positive health care reform in a decade, has instead proposed piecemeal reforms that tinker around the edges of a broken system — essentially rearranging the deck chairs on the Titanic.

Task force members, who refused to hold public hearings, carefully avoided discussing the real cause of sky-high medical costs and poor health outcomes: Treating health care as a business, rather than a public good.

This business mentality, which cuts against the state’s human rights obligations, lies behind the decision by successive Vermont leaders to consolidate our health care system under the UVM Health Network umbrella, driving up costs and creating challenges for providers and patients across the state. The task force’s unwillingness to consider a different system for providing care means that its recommendations fall far short of what is needed to address the crisis of affordability and access.

In addressing the question of reforms, Dr. King in 1967 remarked that “the prescription for the cure rests with the accurate diagnosis of the disease.” Later that year he added, “We must recognize that we can’t solve our problem now until there is a radical redistribution of economic and political power.”

With gridlock in Washington, D.C., for the foreseeable future, state lawmakers hold the responsibility to fight for this kind of transformative change — and the first step they can take is to make Covid-era reforms permanent and universal. Let us move forward together, not one step back.

Karen Saunders is vice president of the Vermont Workers’ Center. She lives in Brattleboro.