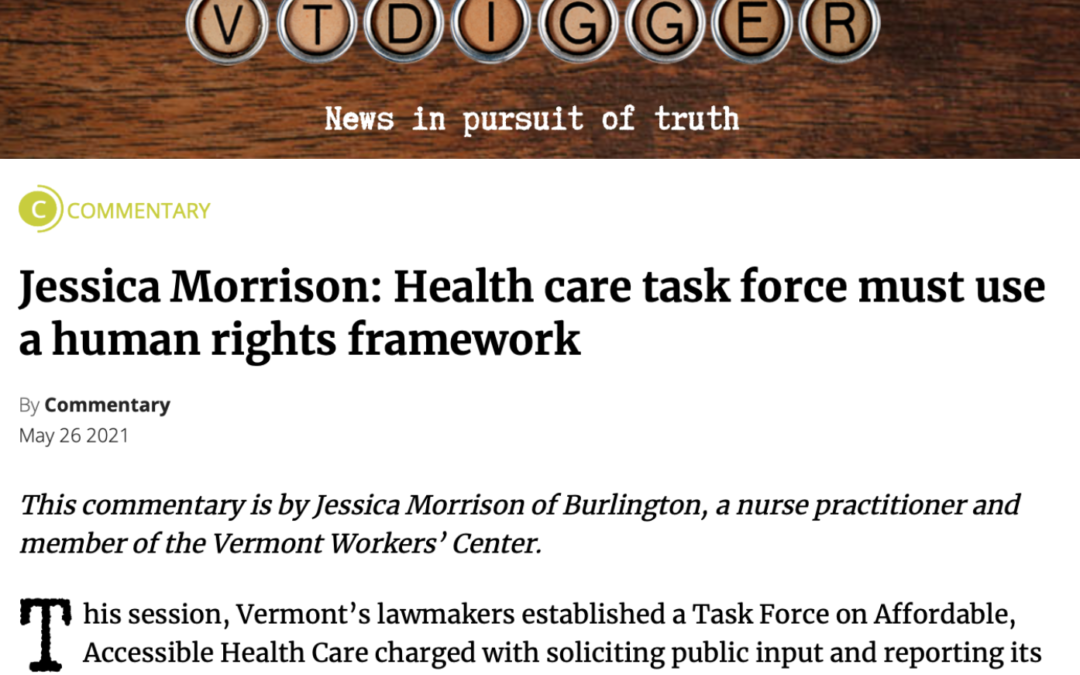 (This commentary by Jessica Morrison was published by VTDigger, the Bennington Banner, and St. Albans Messenger.)

This session, Vermont’s lawmakers established a Task Force on Affordable, Accessible Health Care charged with soliciting public input and reporting its findings to the 2022 legislative session.

The Task Force represents a long-overdue opportunity to address the crisis of healthcare access and affordability in Vermont, which was only exacerbated by the Covid-19 pandemic. Thousands of people in Vermont struggle with high costs and healthcare debt, while pharmaceutical and health insurance companies are draining billions out of healthcare and into the pockets of shareholders and investors. This is a human rights crisis of the highest magnitude, stemming directly from policy decisions that elevate profit over human life.

Healthcare reform must therefore be guided by human rights principles and mechanisms that enable their realization: Public financing and democratic control.

In 2011, Vermont passed Act 48, enacting the nation’s first universal, publicly financed healthcare system. Despite finding that universal healthcare would raise net incomes for 93 percent of Vermont families, lawmakers in 2015 abandoned their constituents and refused to finance it, bowing to pressure from big business and the wealthy.

Public financing means expanding Medicaid to everyone in Vermont regardless of income or immigration status. Partial reform measures, such as adding age brackets to Medicaid or expanding only certain forms of care, pit communities and our health care needs against one another. Lawmakers must see through the argument that states like Vermont should wait for a national “Medicare for All” program, which is akin to the old preacher telling workers not to organize, because they’ll get “pie in the sky when they die.”

The road to a universal, national healthcare program will be paved by bold state-based experiments. With the Biden Administration signaling its support for innovative state waivers, there is every reason for Vermont’s Healthcare Affordability Task Force to pick up the baton and recommend the financing of Act 48.

Democratic control means state government partnering with healthcare workers and communities to build a public health system that serves people in every region of our state. Our current system alienates and disempowers the people it is supposed to serve. A democratically controlled healthcare system would foster participation from everyone, especially poor and marginalized people, in their healthcare decision-making. It will take patients, workers, and the public sector coming together in order for Vermont to hold drug and insurance companies — and corporate hospital networks — accountable for their high prices.

Task Force members must recognize that the current All-Payer Accountable Care Organization model was not designed to improve access to affordable healthcare, and in fact, represents a roadblock on the way to accomplishing this task.

Despite promises to the contrary, the ACO model has accelerated corporate consolidation under UVM Health Network and Dartmouth Hitchcock while leaving primary and preventative care high and dry. It has consumed millions of dollars in public Medicaid money, and has demanded years of resources and expertise from numerous State agencies, including the Green Mountain Care Board, which has increasingly acted as a cheerleader of the model rather than its regulator.

As we enter a new phase of the Covid-19 pandemic, Task Force members must prioritize the needs of their constituents for affordable healthcare and basic services over complex and expensive schemes that don’t improve people’s quality of life.

There is no moral argument for extending the life of a healthcare system that favors the rich over the poor and exacerbates inequalities along the lines of race, gender, disability, and immigration status. Members of the Healthcare Affordability Task Force have an opportunity to recommend a human rights-based approach to healthcare reform that will improve people’s well-being and inspire the rest of the country.

But, as the experience of Act 48 has shown, we can’t afford to wait for politicians to do the right thing. We need to organize independently and understand we’re in a battle with healthcare profiteers and big business. If you have a healthcare story you’d like to share, join us on Wednesday, June 30th for a hybrid online / in-person People’s Hearing on the Right to Healthcare. All people, all care — Healthcare is a human right!

Jessica Morrison is a nurse practitioner and member of the Vermont Workers’ Center. She lives in Burlington.