Dozens rally against health insurance rate hikes, for Medicaid for All 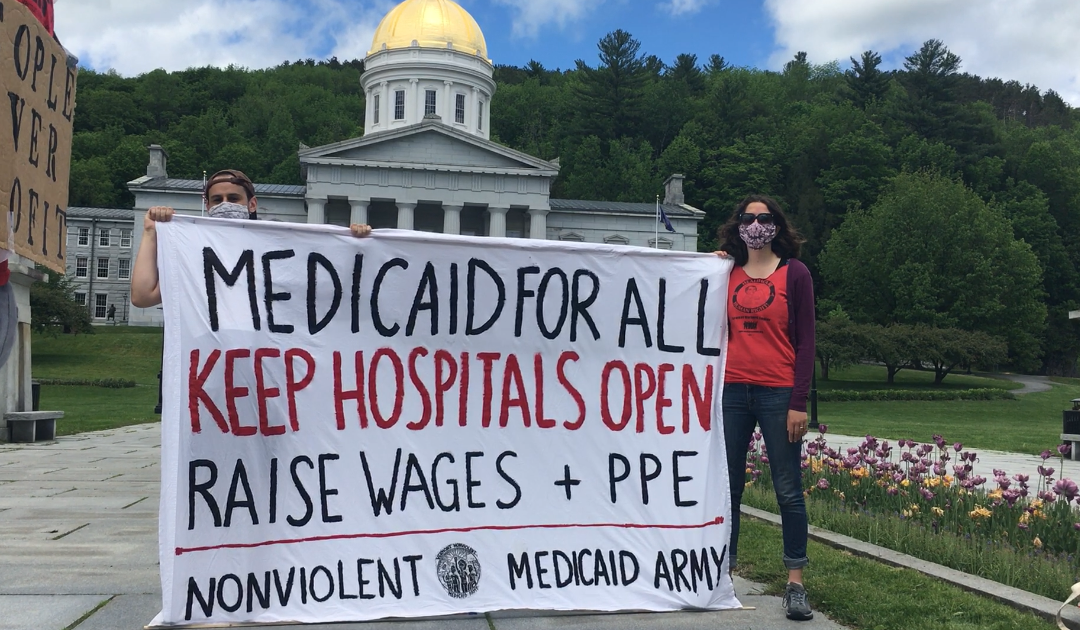 Over 50 people rallied Saturday at the headquarters of Blue Cross Blue Shield of Vermont and at the Vermont statehouse, calling on Governor Phil Scott to expand Medicaid to all Vermont residents, regardless of income or immigration status.

“Here we are in the middle of a pandemic, with massive unemployment and an economic crisis that rivals the Great Depression, and Blue Cross is requesting a 6 percent rate hike. That’s on top of an almost 50 percent jump in premiums since Vermont Health Connect started in 2014.”

“If this pandemic has taught us anything, it’s that our health care system fails to meet the needs of patients and of health care workers, including the thousands of home care workers who don’t make a living wage,” she added.

“I get Medicaid because I am a person with special needs,” said Jessica Sanville, a resident of East Haven and member of Green Mountain Self Advocates. Without Medicaid, she said, “my health would not be good as I have Addison’s disease and take a lot of meds that I wouldn’t be able to afford. Most of all I wouldn’t have my home and home care provider that I’ve been with for ten years, and probably would have to live with my family or be homeless.”

Madelin Walker, a resident of Burlington, called in to the rally from home.

“I’m 21 and I’ve been chronically ill for the past three years. I was uninsured for a long time, and when I was insured, it was incredibly expensive. My debt, my inability to be financially independent because of the way the health care system is crushing me, is a product of this community. But that’s not the type of community we want to be, which is why we’re all out here today.”

“We’re here at the office of our governor, who has said he is standing for affordability, and demanding that he make good on that promise by guaranteeing health care as a human right,” said Kelman.

“Medicaid for All. Keep our hospitals open. Raise wages and get personal protective equipment for everyone who has to work during this crisis. Governor Scott, these aren’t options. This is a moral imperative. You have the power: Do the right thing,” he added.