RELEASE: Oregon Votes on Universal Healthcare. When Will We? 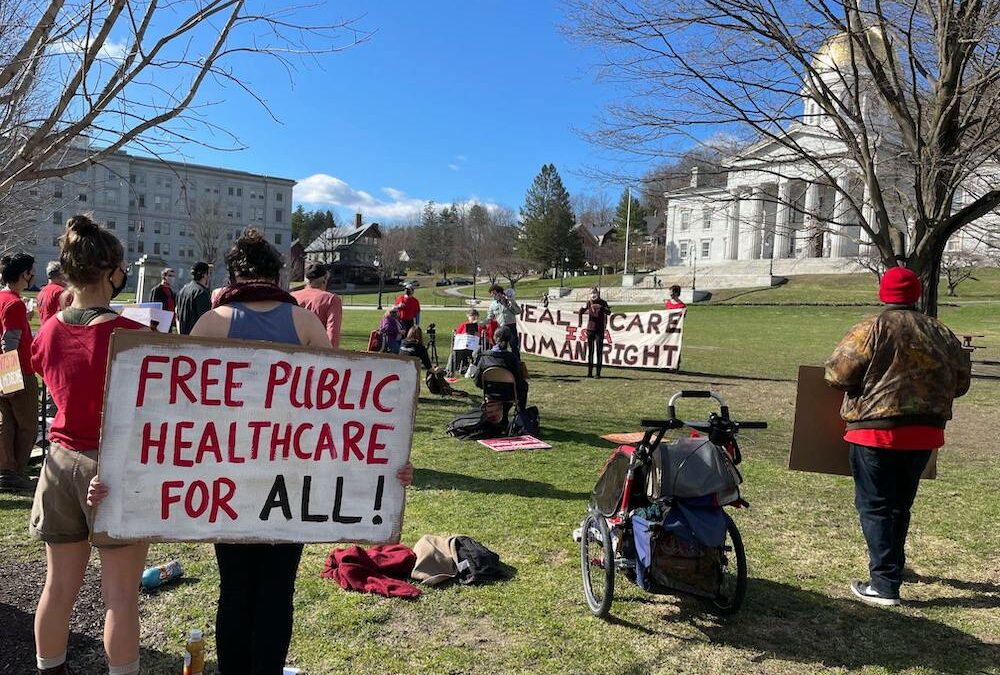 Contact: Ellen Schwartz, Vermont Workers’ Center, eschwa1@myfairpoint.net, (802) 257-4436 (Landline), (802) 380-3903 (Cell)Oregon Votes on Universal Healthcare. When Will We?On Election Day Tuesday, Oregonians voted on Measure 111, deciding whether to become the first state in the country to enshrine healthcare as a human right into their constitution. “It is the obligation of the state,” reads the measure, “to ensure that every resident of Oregon has access to cost-effective, clinically appropriate and affordable health care as a fundamental right.”  As of the time of this writing, the vote remains too close to call, with the “yes” vote having garnered a slight lead at 764,000 votes. If approved, the measure will force the state of Oregon to regulate the cost of private health insurance and increase percentage of people insured, as well as making it harder for them to kick undocumented people off of Medicaid.On Tuesday, Vermonters also considered a ballot measure to enshrine a human right into the state constitution, and became the first state in the country to guarantee reproductive rights inside its borders. While we are proud of this historic vote, Oregon’s ballot measure calls attention to the fact that there remain other areas of care to which Vermonters still do not have access. What’s more, even with the approval of Article 22, there is no guarantee that Vermont’s working people will be able to access reproductive care. There is work still to be done.Oregon’s ballot measure was driven by the rising costs of healthcare and health insurance, and championed by healthcare workers, a nurses’ union, teachers, the Academy of Family Physicians, and the SEIU – many of the professions that work most closely with the most vulnerable. Frustrated with the failures at the federal level to recognize healthcare as a universal human right, states like Oregon are leading the way – and it’s time for us to revisit Vermont’s leadership role on this issue.Here in Vermont, following the groundbreaking passage in 2011 of the nation’s first universal healthcare law—Act 48—then-Governor Peter Shumlin’s administration faced significant pushback from the health insurance lobby, big business associations, and wealthy individuals opposed to paying higher taxes for healthcare. This pressure from the rich led Shumlin and legislative leadership to abandon Act 48 by 2015, despite the governor’s own proposal for public financing demonstrating that 9 out of 10 families would see their incomes increase if the state moved to universal healthcare. [1] The narrative driven by the mainstream media is that Act 48 failed – but the real failure was one of leadership. Our government made the choice not to prioritize the health of 90% of Vermonters over the profits of a few. We can make a different choice now. As yesterday’s vote in Oregon shows, people across the country are ready to take profit out of our healthcare system and ensure that healthcare is guaranteed as a public good for all. As the Biden administration considers ending the Covid-19 Public Health Emergency as early as January 2023—with an estimated 15 million people slated to be kicked off of Medicaid and Children’s Health Insurance—the question of states guaranteeing healthcare as a public good has taken on even greater urgency. Today, supporters of the Healthcare is a Human Right Campaign will deliver over 600 petition signatures to Governor Scott, calling on him to protect and expand pandemic-era housing and healthcare measures—including the expanded Medicaid that has allowed thousands to access free healthcare for the duration of the pandemic. In the face of a national healthcare crisis with little leadership at the federal level, Vermonters are hopeful that Oregon’s ballot measure will pass. Whether it does or not, it’s time for us to act.

The Vermont Workers’ Center is a statewide, member-led organization fighting for economic justice and human dignity — including the human right to healthcare for all.